The New King James Version – would God “mark” His word with an occult symbol?

The Bible in 2 Corinthians 11:14-15 warns of Satan’s counterfeit: “And no marvel; for Satan himself is transformed into an angel of light. Therefore it is no great thing if his ministers also be transformed as the ministers of righteousness;. . .” Isaiah 14: 14 tells of Satan’s ultimate counterfeit: “. . . I will BE LIKE the most High.”

And among his greatest counterfeit’s is the New King James Bible (NKJV). Christians that would never touch a New International Version (NIV), New American Standard (NASV), Revised Standard (RSV), the New Revised Standard (NRSV) or other per-versions are being “seduced” by the subtil NKJV.

And though the New King James does indeed bear a “likeness” to the 1611 King James Bible, as you’ll soon see, there’s something else coiled (see Genesis 3:1) “underneath the cover” of the NKJV.

What About That Mysterious Mark?

Symbols are used throughout the occult. Harpers’ Encyclopaedia of Mystical & Paranormal Experience (p.594) says, “Symbols are important to all esoteric teachings, for they contain secret wisdom accessible only to the initiated.”

Many people have asked about the mysterious symbol on the NKJV.

Thomas Nelson Publishers (publishers of the NKJV) claim, on the inside-cover, the symbol, “. . .is an ancient symbol for the Trinity.” But Acts 17:29, clearly FORBIDS such symbology: “. . . we ought NOT to think that the Godhead is like unto gold, or silver, or stone, GRAVEN BY ART and man’s device.”

The Triqueta is used as the centerpiece for the logo for The Institute of Transpersonal Psychology (ITP). The ITP is a new age school following the Jungian Psychology [occultist Carl Jung]. One of their stated goals is “. . . to reach the recognition of divinity within”(www.itp.edu/about/tp.html) (see Genesis 3:5, “…ye shall be as gods…”)

The same symbol (with a circle) is displayed by the rock group Led Zeppelin. Members of Led Zeppelin are deeply involved in satanism and the occult. Guitarist Jimmy Page, so consumed with satanism, actually purchased satanist Aleister Crowley’s mansion. Most believe the symbol is from the teachings of Aleister Crowley and represents 666.

The “Book of Shadows”, also called a grimoire, is a journal kept either by individual witches or satanists or by a coven or group, records the activities of the group and the incantations used. (Jerry Johnston, The Edge of Evil: The Rise of Satanism on North America, p. 269)

The Witch’s Book of Shadows or Grimoire is a book of spells, enchantments, and rituals. Includes Rituals, Spells, and Wicca Ethics

The Craft Companion: A Witch’s Journal by Dorothy Morrison, a high priest of Witchcraft.

NOTE: We have circled in yellow and also enlarged to the side The NKJV symbol.

Here’s some examples of Satanic and Pagan Jewellery which includes the NKJV logo.

LEFT BOX: Notice the satanic pentagram ring in the top right corner. The ring with the NKJV logo is the fourth down on the left, we highlighted it with a yellow circle. 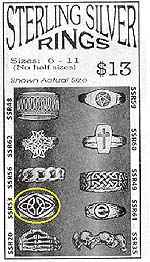 BOTTOM BOX: Notice the very satanic Baphomet Goat.  We broke out and colored the NKJV symbol found in the other two satanic pieces of jewellery.

The book “Blood on the Doorposts” by former Satanists, Bill and Sharon Schnoebelen, also documents the “trio of sixes (666)” in the “NKJV symbol” and goes so far as claim it is “symbolic of the antichrist”:

“A disguised interlocked trio of sixes, symbolic of the antichrist. Also symbolizes the triple goddess of Wicca (three interlocked vesica pisces together). Commonly used in Catholic liturgical iconography, and has recently found its way into the logo of the New King James Bible.” (Bill and Sharon Schnoebelen, Blood on the Doorposts, p. 150)

Among the first changes that greets the reader of the NKJV is the removal of the much maligned “thee, thou and ye”. The Preface to the NKJV states, “. . .thee, thou, and ye are replaced by the simple you,. . These pronouns are no longer part of our language.” But “thee, thou and ye” were “NO LONGER part of the language” during 1611 either. (just read the intro to the 1611 King James, there are no “thee”, “thou” and “ye”). In fact, Webster’s Third New International Dictionary, says of ye: “used from the earliest of times to the late 13th century. . .” (p.2648) And yet the 1611 King James was published 400 years later in the 17th century!

So why are they there?

The Greek and Hebrew language contain a different word for the second person singular and the second person plural pronouns. Today we use the one-word “you” for both the singular and plural. But because the translators of the 1611 King James Bible desired an accurate, word-for-word translation of the Hebrew and Greek text – they could NOT use the one-word “you” throughout! If it begins with “t” (thou, thy, thine) it’s SINGULAR, but if it begins with “y” (ye) it’s PLURAL. Ads for the NKJV call it “the Accurate One”, and yet the 1611 King James, by using “thee”, “thou”, “ye”, is far more accurate!

By the way, if the “thee’s” and “thou’s” are “. . .no longer part of our language” – why aren’t the NKJV translators rushing to make our hymnbooks “much clearer”? “How Great Thou Art” to “How Great You Are”, or “Come Thou Fount” to “Come You Fount” Doesn’t sound right, does it? Isn’t it amazing that they wouldn’t dare “correct” our hymns – and yet, without the slightest hesitation, they’ll “correct” the word of God!

How about that “obsolete word” – “hell”. The NKJV removes the word “hell” 23 times! And how do they make it “much clearer”? By replacing “hell” with “Hades” and “Sheol”! Webster’s New Collegiate Dictionary defines Hades: “the underground abode of the dead in Greek MYTHOLOGY”. By making it “much clearer” – they turn your Bible into MYTHOLOGY! Not only that, Hades is not always a place of torment or terror! The Assyrian Hades is an abode of blessedness with silver skies called “Happy Fields”. In the satanic New Age Movement, Hades is an intermediate state of purification!

Who in their right mind would think “Hades” or “Sheol” is “up-to-date” and “much clearer” than “hell”?

KJV: “And I say also unto thee, That thou art Peter, and upon this rock I will build my church; and the gates of hell shall not prevail against it.”

NKJV: “And I also say to you that you are Peter, and on this rock I will build My church, and the gates of Hades shall not prevail against it.”

KJV: “And in hell he lift up his eyes, being in torments, and seeth Abraham afar off, and Lazarus in his bosom.”

NKJV: “And being in torments in Hades, he lifted up his eyes and saw Abraham afar off, and Lazarus in his bosom.”

The word “damned”, “damnation” is NOT in the NKJV! They make it “much clearer” by replacing it with “condemn” (ditto NIV, RSV, NRSV, NASV). “Condemned” is NO WHERE NEAR AS SERIOUS as “damned”! Damned is eternal! One can be “condemned” and not “damned”. Romans 14:22 says, “. . . Happy is he that condemneth not himself in that thing which he alloweth.” Webster defines “condemned”: to declare to be wrong, but the much more serious and eternal “damn”: “to condemn to hell”.

The word “devils” (the singular, person called the “devil” is) is NOT in the NKJV! Replaced with the “transliterated” Greek word “demon” (ditto NIV, RSV, NRSV, NASV). The Theosophical Dictionary describes demon as: “. . . it has a meaning identical with that of ‘god’, ‘angel’ or ‘genius'”. Even Vines Expository Dictionary of Biblical Words (p.157) defines “demon” as: “an inferior deity, WHETHER GOOD OR BAD”. Webster defines “demon” as: “divinity, spirit, an attendant power or spirit”, but “devil” as: “the personal supreme spirit of EVIL. . .”

One of the most absurd changes ever made is changing the word “servant” to “slave”! The NKJV in Romans 6:22, reads: “But now having been set FREE from sin, and having become SLAVES OF GOD. . .” The NKJV, in 1 Corinthians 7:22, calls the Christian, “Christ’s slave”. Talk about a contradiction! John 8:36 says, “If the Son therefore shall make you FREE, YE SHALL BE FREE INDEED.” But isn’t a Christian supposed to serve? Yes, in love. Not as a slave! Galatians 5:13 explains it, perfectly: “For, brethren, ye have been called unto LIBERTY;(not slavery!) only use not LIBERTY for an occasion to the flesh, but BY LOVE SERVE one another.”

The New Age Movement and the occult are longing for one called the Maitreya. The Bible calls him the Antichrist. New Ager’s refer to him as the “the Coming One” – AND SO DOES THE NKJV! In Luke 7:19, 20 (see also Matt 11:3) John told his disciples to ask Jesus: “Are You THE COMING ONE. . .” In the “The Great Invocation”, a “prayer” highly reverenced among New Agers and chanted to “invoke” the Maitreya, says, “Let Light and Love and Power and Death, Fulfil the purpose of the Coming One.”

And to REALLY show their sympathy with the satanic New Age Movement – BELIEVE IT OR NOT – in Acts 17:29 the New Age NKJV changes “Godhead” to “Divine Nature”! ( ditto NIV, NASV)

And if you think the NKJV just “innocently” updated the “obsolete words”, removed the “thee’s and thou’s” – here’s what the translators proudly admit: “IT IS CLEAR that this revision REQUIRED more than the dropping of “-eth” endings, removing, “thee’s” and “thou’s,” and updating obsolete words.” (The New King James Version, 1982e. p. 1235)

And They Ain’t Just A Kiddin’!

Here’s a sampling of the required changes:

Genesis 2:18: The NKJV ought to make Hillary Clinton proud: “And the Lord God said, It is not good that man should be alone; I will make a helper COMPARABLE TO HIM”

Genesis 24:47: The “old” KJV reads: “I put the earring upon her face”. But the NKJV has different plans for beautiful Rebekah: “I put the nose ring on her nose”. Where did it get the ridiculous idea to “cannibalize” Rebekah? Just take a peek at the NIV, NASV, RSV, NRSV!

Matthew 7:14: change “narrow is the way” to “difficult is the way”. There’s nothing “difficult” about the salvation of Jesus Christ! Jesus says in Matt. 11:30, “For my yoke is EASY, and my burden is light.” THE EXACT OPPOSITE! Boy, you talk about a contradiction!

1 Cor. 1:21: change “foolishness of preaching” to “foolishness of the message preached” (ditto NIV, NASV, NRSV, RSV) There’s nothing foolish about the gospel of Jesus Christ. Unless you’re not saved! 1 Cor. 1:18 says: “For the preaching of the cross is to them that perish FOOLISHNESS. . .” I wonder where that leaves the translators of the NKJV, NIV, NASV, RSV, NRSV?

Phil. 2:6: (NKJV 1979e.) change “thought it not robbery to be equal with God” to “did not consider equality with God something to be grasped”. (robs Jesus Christ of deity) (NIV, NASV, RSV)

1 Timothy 6:5: The NKJV changes “gain is godliness” to “godliness is a MEANS OF gain”. There are NO Greek texts with “means of” in them! Where, oh where, did they come from? Care to take a wild guess? YOU GOT IT! The NIV, NASV, RSV, NRSV!

And That Doesn’t Scratch The Surface Of All The Changes!

In just the New Testament alone the NKJV removes 2.289 words from the KJV!

And most will match the NIV, NASV, RSV, or RSV!

And Thomas Nelson Publishers have the audacity to claim in an ad for the NKJV (Moody Monthly, June 1982, back cover), “NOTHING HAS BEEN CHANGED except to make the original meaning clearer.”

The New King James is a COUNTERFEIT!

It’s NOT NEW! The changes are already in the NIV, NASV, NRSV, or RSV!

And it’s certainly NOT true to the 1611 King James Bible!

www.Truthinreality.com
View all posts by Truth in Reality →
This entry was posted in The KJV and New Age Bibles. Bookmark the permalink.