The Secret Truth of Roman Catholicism

Rarely in all its long and colourful history has the Roman Catholic Church been in such internal disarray as it is today. For centuries the Catholic Church presented to the world a united front. It appeared before men as a powerful monolithic structure, one Church under God, indivisible, with liberty and justice for all.

Beneath the facade, of course, there were differences and power struggles, but the church as a whole gave the appearance of unity and strength. This is not so today. Not only has Rome lost a great deal of its secular power but its very life seems threatened from within.

The following is excerpted from “The Jesuit Vatican New World Order” by Alan Lamont:

Pagan Rome’s Final Solution to the Christian Faith: Subvert and Dominate It

The reason Pagan Rome ‘Christianized’ itself, was because there was one foe which they simply could never conquer. And this was the masses of people in its own Empire who were hearing about Christ and believing THAT story, rather than the false resurrection which Rome held to. And not consequently, the Roman Empire derived its very power from this false mystery religion and false resurrection of Nimrod or Osiris.

As the Roman Caesar was the ‘head’ of these mystery religions, and as such could and did dictate the doctrine and dogma of its believers, e.g. control of their lives in every way, shape or form. And because the Roman Caesar was ‘lord’ of this religion, he held the title of Pontifex Maximus, which means ‘chief bridge-builder to the netherworld.’ And as such demanded he be worshipped as god! Any who would not bow before Caesar and call him ‘lord’, would be imprisoned, tortured or put to death. They would be known as ‘heretics’ and as enemies of the Empire, and called subversive elements.

But they could not stop the spreading of this ‘other resurrection’ which was spreading like wildfire throughout the Empire, called ‘Christianity’ or ‘The Way.’ And for about 360 years tried to stomp it out by persecuting the Christians and putting them to death en mass by way of inquisition. Yet with each and every new wave of inquisitions, Christianity would then double, triple and quadruple.

They would kill 300,000 Christians in a single swoop, and not just Christians, but any who dared not follow the false gods. And when they killed 300,000 people, 600,000 or 900,000 would then pop up in their place. They found themselves in a no-win situation. As a matter of fact, they found themselves in a losing battle where one day they would lose their Empire, and the Christians would one day win, and rule this empire if for nothing else than their sheer numbers. The Roman Inquisitions all through the Empire was akin to throwing gas on an already hot and burning fire.

So what did they do to fix this situation? Nothing at first. For none of the Roman Caesars or Emperors had enough wisdom to handle the issue, yet. But then one day a man named Constantine was crowned Pontifex Maximus or Caesar. And he had the solution and the wisdom to deal with this issue. At first, he tried as his successors did to kill, pillage and burn Christians. Until one day when it dawned upon him, and he “saw the darkness”, viz. a play of the words of seeing the Light.

He saw that it would advantageous to simply fake his own ‘conversion.’ And he did so in 312AD. He claimed to have had a ‘vision’ whereby he saw a giant cross in the sky, and he now became a ‘Christian’.  It was here where Constantine started the co-opting of Christianity. He ordered the Empire to become ‘Christian’ as he had become and ‘saw the light’, viz. darkness.

The word “Vatican” literally means “Divining Serpent” and is derived from Vatis = Diviner and Can = Serpent. Vatican City and St. Peter’s Basilica were built on the ancient pagan site called in Latin vaticanus mons or vaticanus collis, which means hill or mountain of prophecy. 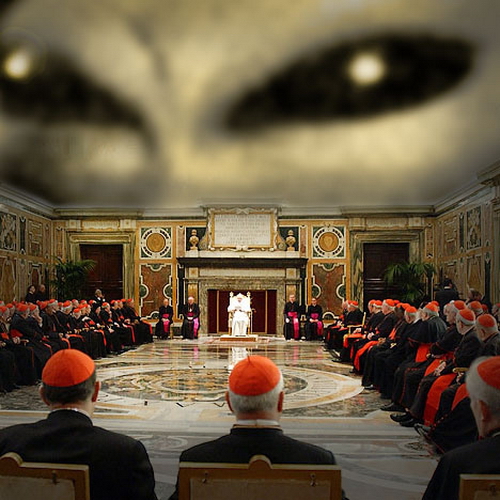 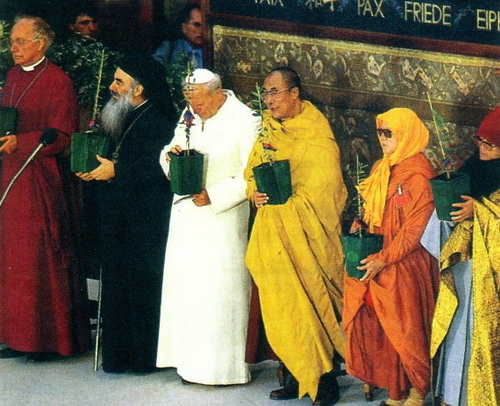 Cardinal Tarcisio Bertone, the Vatican’s former secretary of state from 2006-2013, for decades one of the church’s most powerful officials, and for many years one of most powerful in the Vatican after the Pope 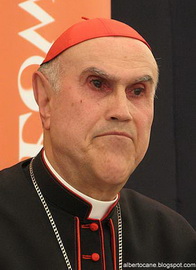 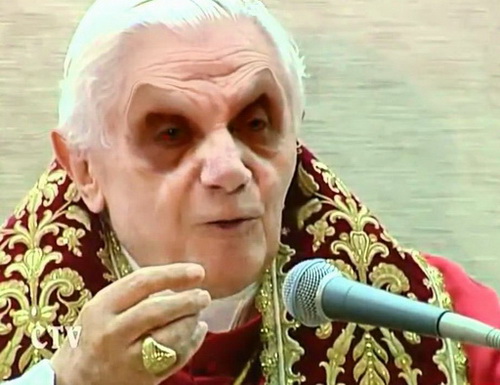 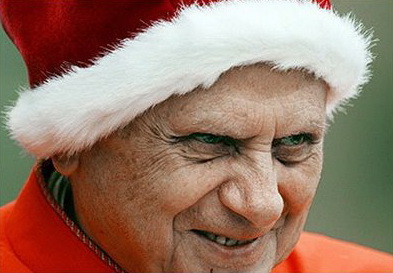 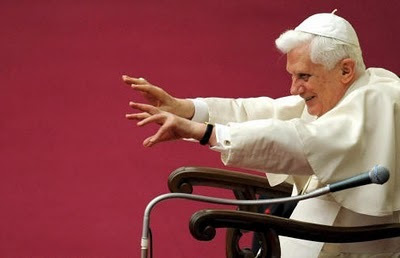 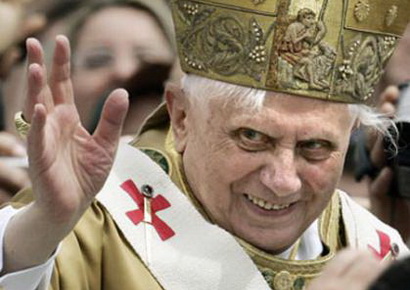 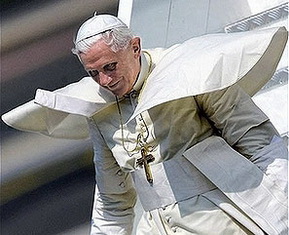 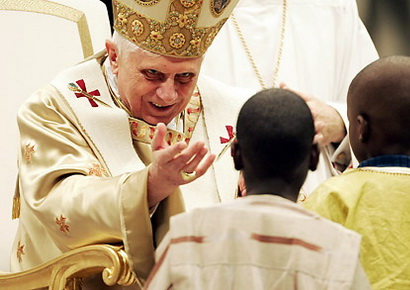 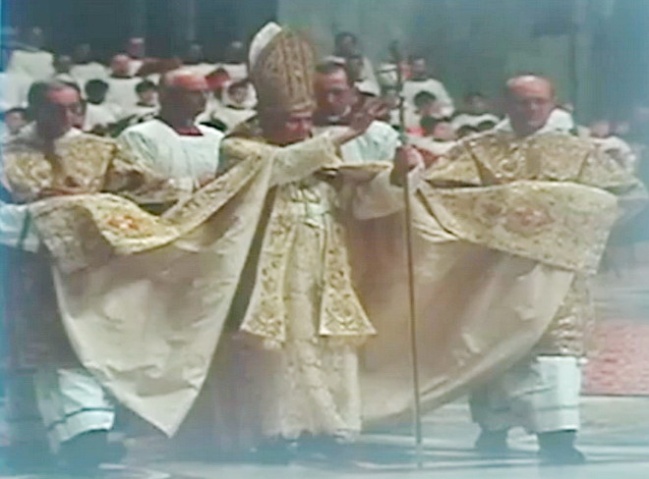 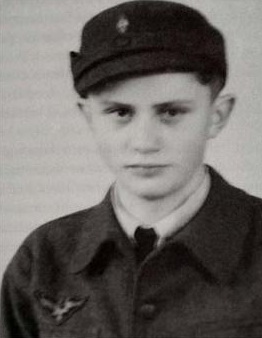 The following is excerpted from “The Crucifixion of Truth” by Tony Bushby:

In the early 1940`s, the I.G. Farben Chemical Company employed a Polish salesman who sold cyanide to the Nazis for use in Auschwitz. The same salesman also worked as a chemist in the manufacture of the poison gas. This same cyanide gas along with Zyklon B and malathion was used to exterminate millions of Jews and other groups. Their bodies were then burned to ashes in the ovens. After the war the salesman, fearing for his life, joined the Catholic Church and was ordained a priest in 1946.

One of his closest friends was Dr. Wolf Szmuness, the mastermind behind the November 1978 to October 1979 and March 1980 to October 1981 experimental hepatitis B vaccine trials conducted by the Center for Disease Control in New York, San Francisco and four other American cities that loosed the plague of AIDS upon the American people. The salesman was ordained Poland`s youngest bishop in 1958.

In his book ‘Behold a Pale Horse,’ former US Naval Intelligence Officer William Cooper (who was famously shot and murdered by police outside his own house on 5 November 2001) relates a story associated with the IG Farben Chemical Company.

In the early 1940s, that company employed a Polish chemist and salesman who sold cyanide gas, Zyklon B and Malathion to the Nazis for extermination of groups of people in Auschwitz.

After the war the salesman joined the Catholic church and was ordained a priest. In 1958 he became Poland’s youngest bishop and after Pope John Paul I’s mysterious death, the ex-cyanide gas salesman Karol Wojtyla was elected to the papacy as Pope John Paul II in October 1978.

In March 2000, he publicly apologized not for his war effort, but for the wickedness of the Christian religion. The plea for forgiveness also sought to pardon the use of ‘violence in the service of truth,’ an often used fragile and troubling reference to the Inquisition.

The apology read by the Pope was the result of four years of work by a panel of 28 theologians and scholars and was by far the most sweeping act by a leader of a major religion. On few occasions only have ecclesiastical authorities ever acknowledged the faults or abuses of which they themselves were guilty. There was concern that the apology was a major theological miscalculation that could undermine the Pope’s weakening authority and the unanswered question posed by the international media was: “In whose name was the Pope asking for forgiveness?”

There is a satanic throne which is decorated with the bodies of men, and shows a reptilian Christ along with a tree of the dead bodies of men 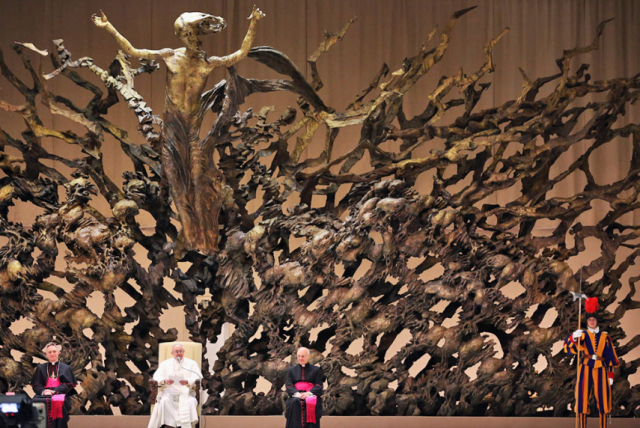 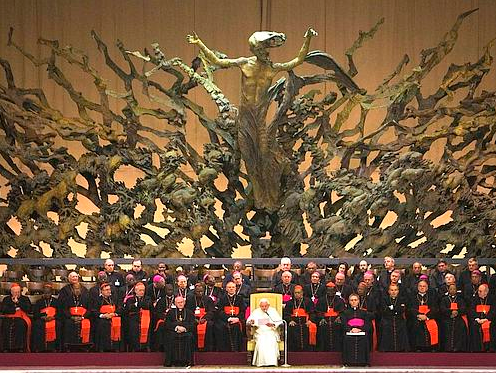 There are also many Youtube videos on the Catholic church

The Truth about Roman Catholicism

Prayer for Renunciation of Catholicism I

Prayer for Renunciation of Catholicism II

www.Truthinreality.com
View all posts by Truth in Reality →
This entry was posted in Truth of Roman Catholicism. Bookmark the permalink.

12 Responses to The Secret Truth of Roman Catholicism